Waku v2 is family of modular peer-to-peer protocols for secure communication. The protocols are designed to be secure, privacy-preserving, censorship-resistant and being able to run in resource restricted environments. At a high level, it implements Pub/Sub over libp2p and adds a set of capabilities to it. These capabilities are things such as: (i) retrieving historical messages for mostly-offline devices (ii) adaptive nodes, allowing for heterogeneous nodes to contribute to the network (iii) preserving bandwidth usage for resource-restriced devices

This makes Waku ideal for running a p2p protocol on mobile and in similarly restricted environments.

Historically, it has its roots in Waku v1, which stems from Whisper, originally part of the Ethereum stack. However, Waku v2 acts more as a thin wrapper for PubSub and has a different API. It is implemented in an iterative manner where initial focus is on porting essential functionality to libp2p. See rough road map (2020) for more historical context.

Waku as a family of protocols is designed to have a set of properties that are useful for many applications:

Many applications require some form of messaging protocol to communicate between different subsystems or different nodes. This messaging can be human-to-human or machine-to-machine or a mix. Waku is designed to work for all these scenarios.

Applications sometimes have requirements that make them suitable for peer-to-peer solutions:

Applications often run in restricted environments, where resources or the environment is restricted in some fashion. For example:

Applications often have a desire for some privacy guarantees, such as:

Applications often have different trade-offs when it comes to what properties they and their users value. Waku is designed in a modular fashion where an application protocol or node can choose what protocols they run. We call this concept adaptive nodes.

For more on the concept of adaptive nodes and what this means in practice, please see the 30/ADAPTIVE-NODES spec.

While Waku is best thought of as a single cohesive thing, there are three network interaction domains:

This is in addition to protocols that specify messages, payloads, and recommended usages. Since these aren’t negotiated libp2p protocols, they are referred to by their RFC ID. For example:

There are also more experimental libp2p protocols such as:

These protocols and their semantics are elaborated on in their own specs.

Use of libp2p and protobuf #

Unless otherwise specified, all protocols are implemented over libp2p and use Protobuf by default. Since messages are exchanged over a bi-directional binary stream, as a convention, libp2p protocols prefix binary message payloads with the length of the message in bytes. This length integer is encoded as a protobuf varint.

Waku is using gossiping to disseminate messages throughout the network.

Direct use of libp2p protocols #

In addition to /vac/waku/* protocols, Waku v2 MAY directly use the following libp2p protocols:

for liveness checks between peers, or to keep peer-to-peer connections alive.

respectively, as basic means for capability discovery. These protocols are anyway used by the libp2p connection establishment layer Waku v2 is built on. We plan to introduce a new Vac capability discovery protocol with better anonymity properties and more functionality.

Waku v2 is built in top of libp2p, and like libp2p it strives to be transport agnostic. We define a set of recommended transports in order to achieve a baseline of interoperability between clients.

This section describes these recommended transports.

Where TCP is supported it MUST be enabled for both dialing and listening, even if other transports are available.

Waku v2 nodes where the environment do not allow to use TCP directly, MAY use other transports.

A Waku v2 node SHOULD support secure websockets for bidirectional communication streams, for example in a web browser context.

A node MAY support unsecure websockets if required by the application or running environment.

Waku v2 can retrieve a list of nodes to connect to using DNS-based discovery as per EIP-1459. While this is a useful way of bootstrapping connection to a set of peers, it MAY be used in conjunction with an ambient peer discovery procedure to find still other nodes to connect to, such as Node Discovery v5. More ambient peer discovery methods are being tested for Waku v2, and will be specified for wider adoption. It is possible to bypass the discovery domain by specifying static nodes.

31/WAKU2-ENR describes the usage of EIP-778 ENR (Ethereum Node Records) for Waku v2 discovery purposes. It introduces two new ENR fields, multiaddrs and waku2, that a Waku v2 node MAY use for discovery purposes. These fields MUST be used under certain conditions, as set out in the spec. Both EIP-1459 DNS-based discovery and Node Discovery v5 operates on ENR, and it’s reasonable to expect even wider utility for ENR in Waku v2 networks in future.

In addition to the Gossip domain, Waku provides a set of Request/Reply protocols. They are primarily used in order to get Waku to run in resource restricted environments, such as low bandwidth or being mostly offline.

There is also an experimental fault-tolerant addition to the store protocol that relaxes the high availability requirement. See 21/WAKU2-FT-STORE

This is used to make fetching of a subset of messages more bandwidth preserving. See 12/WAKU2-FILTER spec for more details.

This is used for nodes with short connection windows and limited bandwidth to publish messages into the Waku network. See 19/WAKU2-LIGHTPUSH spec for more details.

The above is a non-exhaustive list, and due to the modular design of Waku there may be other protocols here that provide a useful service to the Waku network.

See the sequence diagram below for an overview of how different protocols interact. 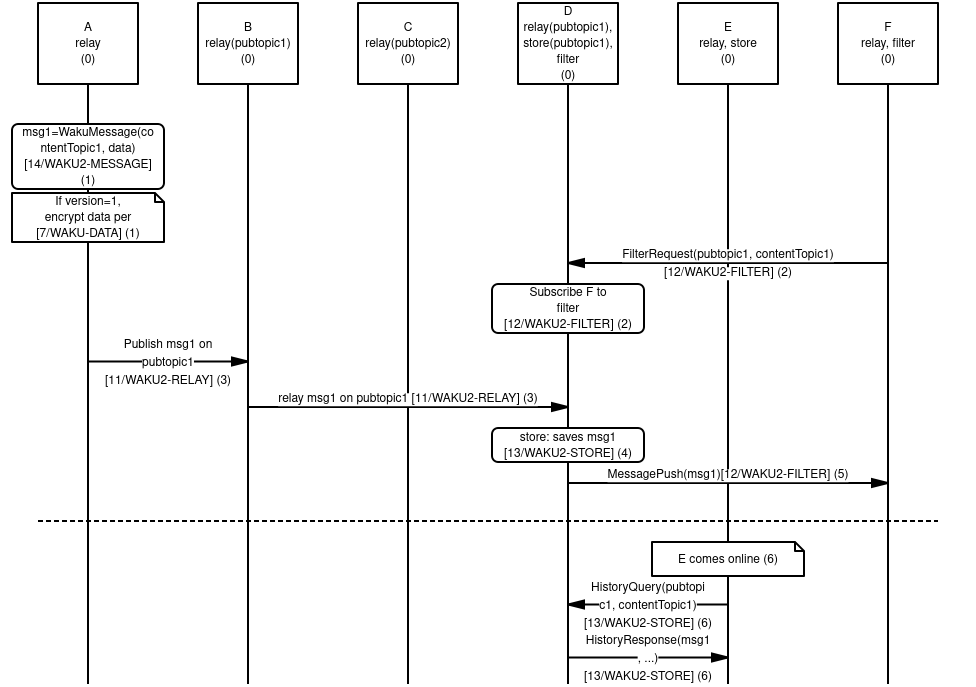 Appendix A: Upgradability and Compatibility #

Waku v1 and Waku v2 are different protocols all together. They use a different transport protocol underneath; Waku v1 is devp2p RLPx based while Waku v2 uses libp2p. The protocols themselves also differ as does their data format. Compatibility can be achieved only by using a bridge that not only talks both devp2p RLPx and libp2p, but that also transfers (partially) the content of a packet from one version to the other.

See 15/WAKU-BRIDGE for details on a bidirectional bridge mode.

Each protocol layer of Waku v2 provides a distinct service and is associated with a separate set of security features and concerns. Therefore, the overall security of Waku v2 depends on how the different layers are utilized. In this section, we overview the security properties of Waku v2 protocols against a static adversarial model which is described below. Note that a more detailed security analysis of each Waku protocol is supplied in its respective specification as well.

In the primary adversarial model, we consider adversary as a passive entity that attempts to collect information from others to conduct an attack, but it does so without violating protocol definitions and instructions.

The following are not considered as part of the adversarial model:

Waku v2 by default guarantees pseudonymity for all of the protocol layers since parties do not have to disclose their true identity and instead they utilize libp2p PeerID as their identifiers. While pseudonymity is an appealing security feature, it does not guarantee full anonymity since the actions taken under the same pseudonym i.e., PeerID can be linked together and potentially result in the re-identification of the true actor.

At a high level, anonymity is the inability of an adversary in linking an actor to its data/performed action (the actor and action are context-dependent). To be precise about linkability, we use the term Personally Identifiable Information (PII) to refer to any piece of data that could potentially be used to uniquely identify a party. For example, the signature verification key, and the hash of one’s static IP address are unique for each user and hence count as PII. Notice that users’ actions can be traced through their PIIs (e.g., signatures) and hence result in their re-identification risk. As such, we seek anonymity by avoiding linkability between actions and the actors / actors’ PII. Concerning anonymity, Waku v2 provides the following features:

Subscriber-Topic Unlinkability: This feature stands for the unlinkability of the subscriber to its subscribed topics in the 11/WAKU2-RELAY protocol. The Subscriber-Topic Unlinkability is achieved through the utilization of a single PubSub topic. As such, subscribers are not re-identifiable from their subscribed topic IDs as the entire network is linked to the same topic ID. This level of unlinkability / anonymity is known as k-anonymity where k is proportional to the system size (number of subscribers). Note that there is no hard limit on the number of the pubsub topics, however, the use of one topic is recommended for the sake of anonymity.

This property indicates that no adversary can flood the system (i.e., publishing a large number of messages in a short amount of time), either accidentally or deliberately, with any kind of message i.e. even if the message content is valid or useful. Spam protection is partly provided in 11/WAKU2-RELAY through the scoring mechanism provided for by GossipSub v1.1. At a high level, peers utilize a scoring function to locally score the behavior of their connections and remove peers with a low score.

Confidentiality can be addressed through data encryption whereas integrity and authenticity are achievable through digital signatures. These features are provided for in 14/WAKU2-MESSAGE (version 1)` through payload encryption as well as encrypted signatures.

Lack of anonymity/unlinkability in the protocols involving direct connections including 13/WAKU2-STORE and 12/WAKU2-FILTER protocols: The anonymity/unlinkability is not guaranteed in the protocols like 13/WAKU2-STORE and 12/WAKU2-FILTER where peers need to have direct connections to benefit from the designated service. This is because during the direct connections peers utilize PeerID to identify each other, therefore the service obtained in the protocol is linkable to the beneficiary’s PeerID (which counts as PII). For 13/WAKU2-STORE, the queried node would be able to link the querying node’s PeerID to its queried topics. Likewise, in the 12/WAKU2-FILTER, a full node can link the light node’s PeerIDs to its content filter.

There are multiple implementations of Waku v2 and its protocols:

Below you can find an overview of the specs that they implement as they relate to Waku v2. This includes Waku v1 specs, as they are used for bridging between the two networks.

To get compatibility with Waku v1:

For an interoperable keep-alive mechanism:

The following features are currently experimental and under research and initial implementation:

Economic Spam resistance: We aim to enable an incentivized spam protection technique to enhance 11/WAKU2-RELAY by using rate limiting nullifiers. More details on this can be found in 17/WAKU2-RLN-RELAY. In this advanced method, peers are limited to a certain rate of messaging per epoch and an immediate financial penalty is enforced for spammers who break this rate.

Prevention of Denial of Service (DoS) and Node Incentivization: Denial of service signifies the case where an adversarial node exhausts another node’s service capacity (e.g., by making a large number of requests) and makes it unavailable to the rest of the system. DoS attack is to be mitigated through the accounting model as described in 18/WAKU2-SWAP. In a nutshell, peers have to pay for the service they obtain from each other. In addition to incentivizing the service provider, accounting also makes DoS attacks costly for malicious peers. The accounting model can be used in 13/WAKU2-STORE and 12/WAKU2-FILTER to protect against DoS attacks.

Additionally, this gives node operators who provide a useful service to the network an incentive to perform that service. See 18/WAKU2-SWAP for more details on this piece of work.