The security objective is to contain spam activity in a GossipSub network by enforcing a global messaging rate to all the peers. Peers that violate the messaging rate are considered spammers and their message is considered spam. Spammers are also financially punished and removed from the system.

In open and anonymous p2p messaging networks, one big problem is spam resistance. Existing solutions, such as Whisper’s proof of work are computationally expensive hence not suitable for resource-limited nodes. Other reputation-based approaches might not be desirable, due to issues around arbitrary exclusion and privacy.

We augment the 11/WAKU2-RELAY protocol with a novel construct of RLN to enable an efficient economic spam prevention mechanism that can be run in resource-constrained environments.

The messaging rate is defined by the period which indicates how many messages can be sent in a given period. We define an epoch as $\lceil$ unix_time / period $\rceil$. For example, if unix_time is 1644810116 and we set period to 30, then epoch is $\lceil$(unix_time/period)$\rceil$ = 54827003. Note that epoch refers to epoch in RLN and not Unix epoch. This means a message can only be sent every period, where period is up to the application. See see section Recommended System Parameters for some recommended ways to set a sensible period value depending on the application. Peers subscribed to a spam-protected pubsubTopic are only allowed to send one message per epoch. The higher-level layers adopting 17/WAKU2-RLN-RELAY MAY choose to enforce the messaging rate for WakuMessages with a specific contentTopic published on a pubsubTopic.

Peers subscribed to a specific pubsubTopic form a RLN group.

Peers MUST be registered to the RLN group to be able to publish messages. Registration is moderated through a smart contract deployed on the Ethereum blockchain. Each peer has an RLN key pair denoted by sk and pk. The secret key sk is secret data and MUST be persisted securely by the peer. The state of the membership contract contains the list of registered members’ public identity keys i.e., pks. For the registration, a peer creates a transaction that invokes the registration function of the contract via which registers its pk in the group. The transaction also transfers some amount of ether to the contract to be staked. This amount is denoted by staked_fund and is a system parameter. The peer who has the secret key sk associated with a registered pk would be able to withdraw a portion reward_portion of the staked fund by providing valid proof. reward_portion is also a system parameter.

Note that sk is initially only known to its owning peer however, it may get exposed to other peers in case the owner attempts spamming the system i.e., sending more than one message per epoch. An overview of registration is illustrated in Figure 1. 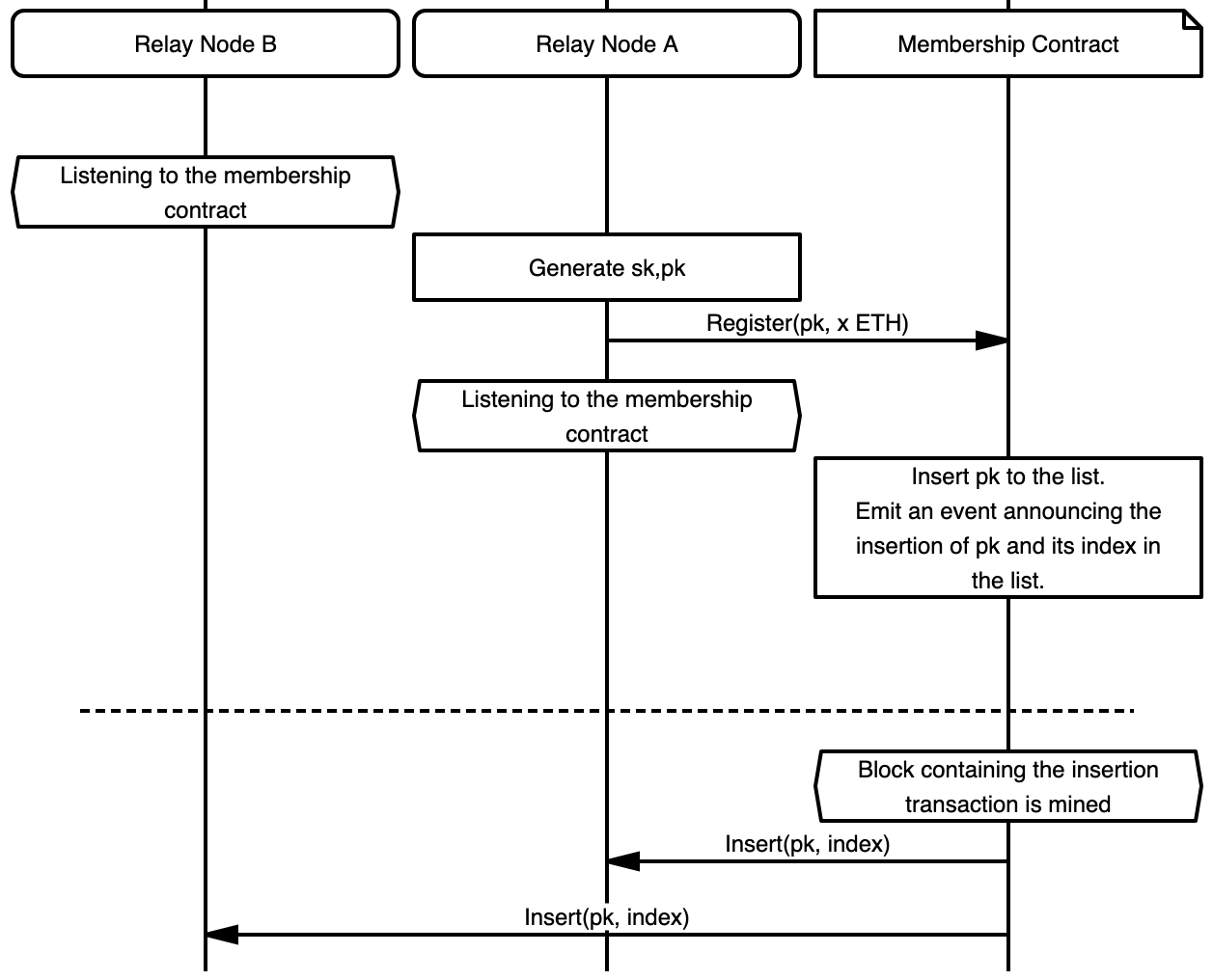 To publish at a given epoch, the publishing peer proceeds based on the regular 11/WAKU2-RELAY protocol.
However, to protect against spamming, each WakuMessage (which is wrapped inside the data field of a PubSub message) MUST carry a RateLimitProof with the following fields. Section Payload covers the details about the type and encoding of these fields.

The merkle_root contains the root of the Merkle tree.

The epoch represents the current epoch.

The share_x and share_y can be seen as partial disclosure of peer’s sk for the intended epoch. They are derived deterministically from peer’s sk and current epoch using Shamir secret sharing scheme. If a peer discloses more than one such pair (share_x, share_y) for the same epoch, it would allow full disclosure of its sk and hence get access to its staked fund in the membership contract.

The proof field is a zero-knowledge proof signifying that:

Another approach for synchronizing the state of slashed pks is to disseminate such information through a p2p GossipSub network to which all peers are subscribed. This is in addition to sending the deletion transaction to the membership contract. The benefit of an off-chain slashing is that it allows real-time removal of spammers as opposed to on-chain slashing in which peers get informed with a delay, where the delay is due to mining the slashing transaction. For the group synchronization, one important security consideration is that peers MUST make sure they always use the most recent Merkle tree root in their proof generation. The reason is that using an old root can allow inference about the index of the user’s pk in the membership tree hence compromising user privacy and breaking message unlinkability.

If the epoch attached to the message is more than max_epoch_gap apart from the routing peer’s current epoch then the message is discarded and considered invalid. This is to prevent a newly registered peer from spamming the system by messaging for all the past epochs. max_epoch_gap is a system parameter for which we provide some recommendations in section Recommended System Parameters.

The routing peers MUST check whether the provided Merkle root in the RateLimitProof is valid. It can do so by maintaining a local set of valid Merkle roots, which consist of acceptable_root_window_size past roots. These roots refer to the final state of the Merkle tree after a whole block consisting of group changes is processed. The Merkle roots are updated on a per-block basis instead of a per-event basis. This is done because if Merkle roots are updated on a per-event basis, some peers could send messages with a root that refers to a Merkle tree state that might get invalidated while the message is still propagating in the network, due to many registrations happening during this time frame. By updating roots on a per-block basis instead, we will have only one root update per-block processed, regardless on how many registrations happened in a block, and peers will be able to successfully propagate messages in a time frame corresponding to roughly the size of the roots window times the block mining time.

Atomic processing of the blocks are necessary so that even if the peer is unable to process one event, the previous roots remain valid, and can be used to generate valid RateLimitProof’s.

This also allows peers which are not well connected to the network to be able to send messages, accounting for network delay. This network delay is related to the nature of asynchronous network conditions, which means that peers see membership changes asynchronously, and therefore may have differing local Merkle trees. See Recommended System Parameters on choosing an appropriate acceptable_root_window_size.

The routing peers MUST check whether the zero-knowledge proof proof is valid. It does so by running the zk verification algorithm as explained in RLN. If proof is invalid then the message is discarded.

To enable local spam detection and slashing, routing peers MUST record the nullifier, share_x, and share_y of incoming messages which are not discarded i.e., not found spam or with invalid proof or epoch. To spot spam messages, the peer checks whether a message with an identical nullifier has already been relayed.

An overview of the routing procedure and slashing is provided in Figure 2. 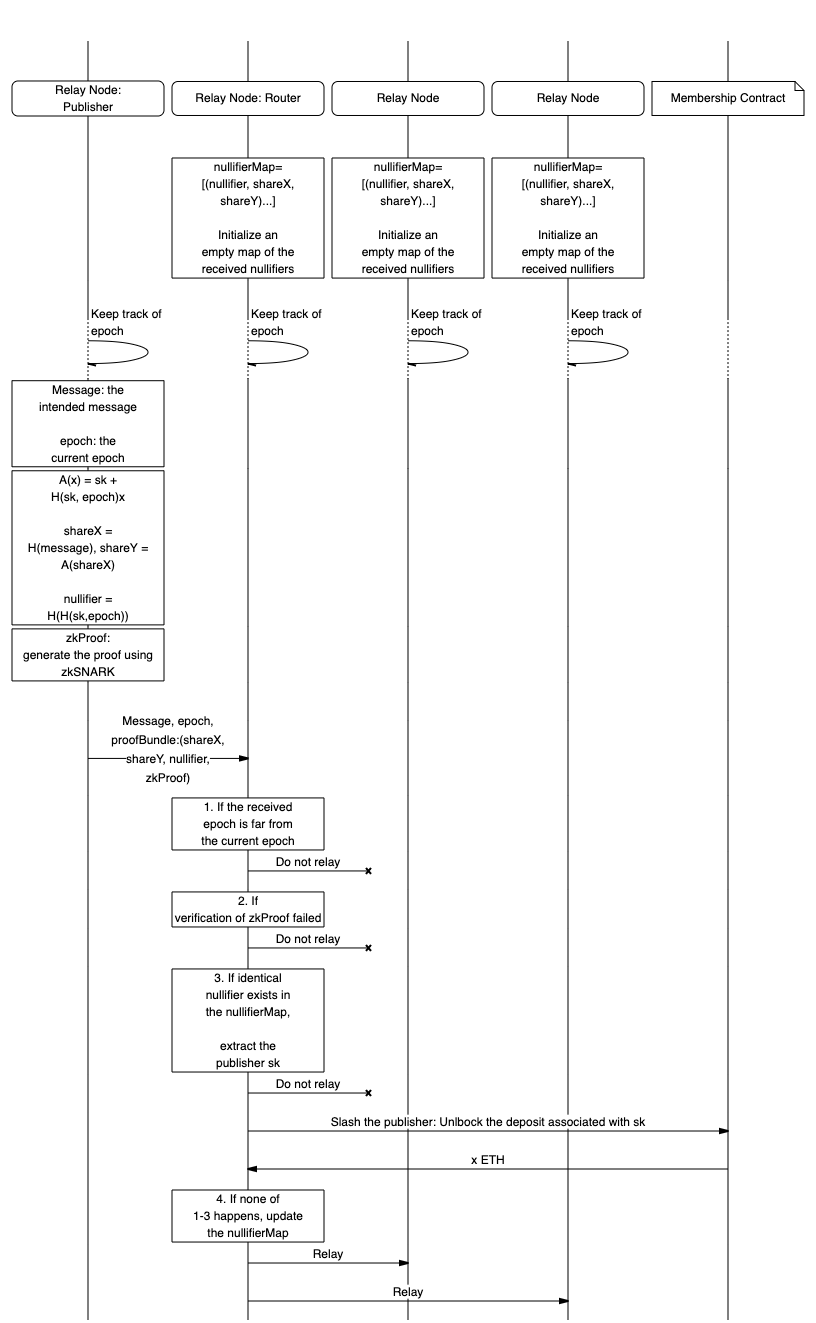 Payloads are protobuf messages implemented using protocol buffers v3. Nodes MAY extend the 14/WAKU2-MESSAGE with a rate_limit_proof field to indicate that their message is not spam.

rate_limit_proof holds the information required to prove that the message owner has not exceeded the message rate limit.

Below is the description of the fields of RateLimitProof and their types.

The system parameters are summarized in the following table, and the recommended values for a subset of them are presented next.

A sensible value for the period depends on the application for which the spam protection is going to be used. For example, while the period of 1 second i.e., messaging rate of 1 per second, might be acceptable for a chat application, might be too low for communication among Ethereum network validators. One should look at the desired throughput of the application to decide on a proper period value. In the proof of concept implementation of 17/WAKU2-RLN-RELAY protocol which is available in nim-waku, the period is set to 1 second. Nevertheless, this value is also subject to change depending on user experience.

We discussed in the Routing section that the gap between the epoch observed by the routing peer and the one attached to the incoming message should not exceed a threshold denoted by max_epoch_gap . The value of max_epoch_gap can be measured based on the following factors.

With a reasonable approximation of the preceding values, one can set max_epoch_gap as max_epoch_gap $= \lceil \frac{\text{Network Delay} + \text{Clock Asynchrony}}{\text{Epoch Length}}\rceil$ where period is the length of the epoch in seconds. Network_Delay and Clock_Asynchrony MUST have the same resolution as period . By this formulation, max_epoch_gap indeed measures the maximum number of epochs that can elapse since a message gets routed from its origin to all the other peers in the network.

By this formulation, acceptable_root_window_size will provide a lower bound of how many roots can be acceptable by a routing peer.

The acceptable_root_window_size should indicate how many blocks may have been mined during the time it takes for a peer to receive a message. This formula represents a lower bound of the number of acceptable roots.